by Steve Ellner in NACLA Report on the Americas 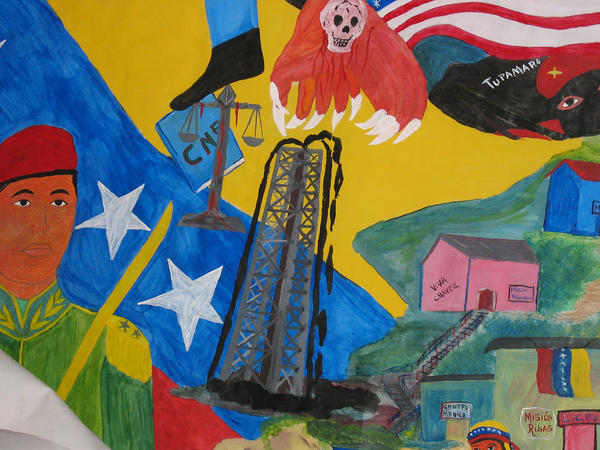 Mural in the barrio of La Vega, Caracas. Photo by Sujatha Fernandes.

The violent anti-government protests that shook Venezuela in February have once again thrust the issue of the pace of change into the broader debate over socialist transformation. Radical Chavistas, reflecting the zeal of the movement’s rank and file, call for a deepening of the “revolutionary process,” while moderate Chavistas favor concessions to avoid an escalation of the violence. The same dilemma confronted the socialist government of Salvador Allende in the early 1970s, but under different political circumstances. Unlike in Chile, Hugo Chávez and his successor Nicolás Maduro have won nearly all national elections over a period of 15 years by absolute majorities. In addition, Chavistas, since the early years, have maintained firm control of the two most important institutions in the country: the armed forces and the state oil company PDVSA.

The invigoration of the Chavista rank and file, along with mass mobilizations, became a must for the Maduro government’s political survival in the face of the opposition’s disruptive and at times violent tactics in February. Thus on successive days in late February, Maduro spoke at mass rallies of women, oil workers, motorcyclists, telephone workers, and finally peasants and indigenous people. On each occasion social movement representatives called for the “deepening of the revolutionary process,” “radicalization,” and “people’s power.” Maduro, for his part, outlined popular measures and at times threatened the elite with radicalization. This combination of expectations of radicalization and announced programs favoring the popular sectors had enabled Chávez to overcome situations of crisis in the past.

Similarly, immediately after each triumph, the Chávez government took advantage of its political capital by announcing bold initiatives. For instance, following his victory in the recall election of 2004, Chávez defined himself as a socialist and expropriated several abandoned factories. After his capture of 63% of the vote in the 2006 presidential elections he nationalized strategic industries. The impressive showing of the Chavistas in the December 2013 municipal elections appeared to follow the same pattern in that immediately after the contests, Maduro took calculated risks. Opinion, however, has been divided within the movement as to whether his moves contributed to the deepening of the revolutionary process or represented a step backward. The measures he implemented were designed to face the problems of acute shortages of basic commodities, price increases far above those set by the government, a 56% inflation rate (nearly triple that of the previous year), widespread currency speculation, and the refusal of the opposition to recognize the government’s legitimacy.