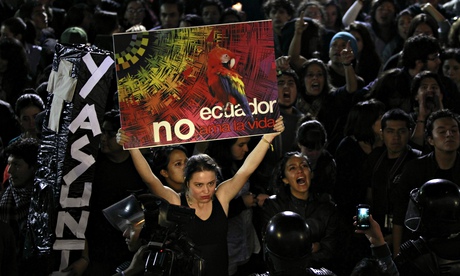 Yasuni protestors in at the government palace in Quito, Ecuador. ‘Correa has to stop criminalising dissent and start a dialogue with the social movements and young yasunidos.’ Photograph: Dolores Ochoa/AP

Leftwing Latin American intellectuals have made two mistakes in their analyses of the past 100 years. First, failing to understand political processes on the left that don’t easily fit into received Marxist and non-Marxist theories. Second, silencing – either out of complacency or fear of playing into the hands of the right – any criticism of the wrongs of those processes. In so doing, intellectuals miss the opportunity to turn critical solidarity into a tool for their struggle.

Since 1998, the year of Hugo Chávez’s rise to power, the Latin American left has had the most illustrious period in its history, if not the entire left worldwide. The progressive governments of the past 15 years are remarkable for a number of reasons: they are occurring at a time when neoliberal capitalism is not only rampant but also fiercely hostile to any national projects that stray from it; they are all very different in nature, flaunting a diversity that is unheard of on the left; and they are all marked by a high degree of popular involvement.

The most complex instance of all that makes up this new period of the Latin American left is Rafael Correa, who has been in power in Ecuador since 2006. One could argue whether Correa’s governments are left or centre-left, but it seems absurd to consider them rightwing, as claimed by some leftist opponents.It is widely agreed that, in spite of everything, Correa is the best president Ecuador has had in decades, and there is not a shred of doubt that he has promoted the widest redistribution of income in Ecuadorean history.

Correa is the great moderniser of Ecuadorean capitalism, which rests on three ideas. First, the centrality of the state as the driver of modernisation, a tenet linked to anti-imperialism vis-a-vis the US (closing the Manta military base; the aggressive struggle against American energy group Chevron and the environmental destruction it caused in the Amazon; and granting asylum to Julian Assange). Second, the achievement of a more modern, egalitarian society “without harming the rich” (that is, without interfering with the model of capitalist accumulation). Third, an increase in democratic participation and active citizenship.

Does this programme go against the 2008 constitution, deemed one of the most revolutionary in Latin America? The constitution bespeaks an alternative model of development based on buen vivir, a notion so novel that it can only be adequately uttered in a non-colonial language, Quechua: sumak kawsay. Its ramifications are manifold: nature viewed as a living and therefore limited being, not an inexhaustible resource; economy and society seen as deeply pluralistic, based on reciprocity, solidarity, interculturality and plurinationality; and politics and the state as highly participatory for the citizen.

All this is important for Correa, but it is a long-term goal. In the short term his aim is to generate wealth in order to redistribute income and create the social policies and infrastructure the country urgently needs for its development. Politics must be sacrificial. It is therefore necessary, he argues, to intensify the exploitation of natural resources before a reduced dependency on them becomes possible. Furthermore, the efficiency required by such a vast process of modernisation cannot be jeopardised by democratic dissent.

Correa rightly sees himself as a victim of the media – which, as in other South American countries, serves capital and the right. He is trying to regulate the media, and his proposals have many positive sides, but at the same time are turning up the heat to such extremes that politics itself is just one step away from being demonised. Journalists are being harassed and social activists accused of terrorism.

Correa also rightly believes that the institutions of state were never politically neutral – but he is unable to tell neutrality from objectivity. Instead, he thinks these institutions should play an active role in politics. It is therefore only natural for the judicial system to be demonised whenever its decisions are seen as being anti-government; for the constitutional court to avoid controversial issues (such as the La Cocha indigenous justice cases) where decisions may damage the higher interests of the state; or for a leading member of the national electoral council, in charge of overseeing a referendum on oil drilling in Yasuni national park, to publicly speak against the consultation before any verification was made.

This is all the more tragic in view of the fact that Correa sees himself as a builder of the nation state. In times of global neoliberalism this is an important goal. However, he does not seem to consider the possibility that the new nation state could be institutionally very different from the model of the colonial state, or the creole, mestizo state that came after it. This is why the indigenous claim for plurinationality has been seen as a threat to the unity (or centrality) of the state, instead of being tactfully addressed in accordance with the constitution.

This is 21st-century capitalism we are talking about, then. Any mention of 21st-century socialism would seem a distant goal at best. Perhaps the main problem lies in the kind of capitalism he has fostered. Each cabinet reshuffle has only strengthened the corporate, right-leaning elites. Is the centre-left destined to slide inexorably towards the right, as was the case with European social democracy? Were it to happen, it would be a tragedy both for the country and the entire continent.

Will Correa be able to salvage the great historical opportunity to carry out the citizen’s revolution he set out to wage? I believe he will, but his margin for manoeuvre is shrinking fast. First, democracy itself needs to be democratised: Correa has to feel confident enough to stop criminalising dissent and start a dialogue with the social movements and young yasunidos. Second, social life needs to be decommodified; the buen vivir certainly does not entail handing out goodies to the popular classes so they can poison themselves with the kind of fast-food rubbish that fills shopping malls. Third, in a society as heterogeneous as that of Ecuador, the state and its public services need to advance in tandem with their democratisation and decolonisation.

The country is shared by all, but it does not have to be shared by all in the same fashion. To this day colonised societies are divided into two groups: those who cannot forget and those who would rather not remember. The ones who cannot forget – the indigenous peoples – are those who had to build and make their own the “homeland” that was imposed on them by foreigners. The ones who would rather not remember – the colonisers and their descendants – are those who find it hard to acknowledge that the homeland that is now shared by all has its roots in a historical injustice, colonialism, that it is everyone’s task to erase.

© 2014 Guardian News and Media Limited or its affiliated companies. All rights reserved.